It’s that time of the year once again where I decide to risk the wrath of the internet and say something about the state of the world as I see it. Firstly, Merry Christmas. To all my family and friends, to all the positive, good-doing people of the world, I love you all dearly. To all the haters, the assholes, the murderers, abusers, manipulators, fuck off. Have a shit, lonely Christmas, you worthless pricks.

I think it’s worth looking back over 2015 to try to make 2016 better. We’re all human, and we all make mistakes. Think back over the last year to those times when you were an asshole for no particular reason (and we all had them), when you pushed someone who didn’t deserve it, or were rude to someone just because you were having a bad day, or didn’t help someone when you could have, etc., etc., etc., and in 2016 try to even it out by doing something positive. In fact, if everyone did two positive things for each negative thing, it would be pretty much problem solved.


Humanity is a pretty odd species. We search endlessly for new life in space while relentlessly destroying life on Earth; we big up war heroes and honour our war dead then commit the ultimate disrespect to those people who died for our freedom by starting new wars and taking the freedom away from someone else; we respond to someone killing our children by bombing theirs; we create an entire industry of building weapons that can kill other people then complain when people use them to do what they're designed for …. doesn’t make a lot of sense, does it?

The same as charity starts at home, so does creating a better world. Not all of us can rush off to Cambodia to build a school for impoverished children, but we can offer a smile to someone who might be having a bad day, share a donut with a stranger, give food to a stray cat, pick up litter off the street, be nice to that guy at work who always blanks you, slow down just enough to let someone who might be in a hurry cross the street.

Just think how much better life could be if we spent all that money, time, and effort on building and creating rather than destroying and taking away. Perhaps if everyone tried just a little harder to do good things (beyond sharing posts on Facebook…) then we might not have to watch miserable shit on the news every single day.

Merry Christmas and a great 2016 to you all!
Posted by Chris Ward at 06:27 No comments: Links to this post

Email ThisBlogThis!Share to TwitterShare to FacebookShare to Pinterest
Labels: Chris Ward, Christmas message, think about it

The Head of Words audiobook is now live!

Narrated by the fantastic Tim Bick, you can now get Head of Words in audio. Head of Words is my highest rated novel, with an average rating of 4.8 on Amazon.com.

Check it out by clicking the cover below. 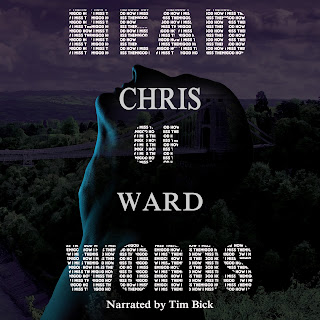 Posted by Chris Ward at 22:28 No comments: Links to this post