New book out this Tuesday, the second in my romantic suspense series set in Tokyo. Go check it out. I'm running a small giveaway - one winner will receive an Amazon Gift Card worth $25. To enter, you have to buy the book and tweet me a copy of your receipt to @chriswardwriter, or send me a pic of it on your kindle. 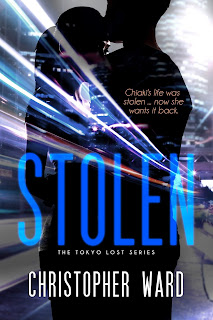 Chiaki Hasegawa is a multi-million selling singer songwriter, but her career peak is a decade behind her. Now she lives like a caged bird, fighting to escape the violent and oppressive grip of her manager, Masaaki Iida, who is desperate to resurrect her career, no matter what the cost.

Then one day she meets Ben Wilson, a traveller and train blogger struggling with his heartbreak and obligation to the family he wronged.

Chiaki's life is turned on its head, and for the first time she sees the possibility of a life beyond music.

But Masaaki Iida will never allow it.....

Posted by Chris Ward at 05:36 No comments: Links to this post

September was a long month. It was also, due to busting all kinds of ass, my most financially successful month of the year.

But that's not saying much.

I won't talk figures, but let's just say that I've already written off 2016 as a slump year and am building towards greater success in 2017.

So what did I get done in September?

I focused mainly on building my mailing list(s) and setting up lots of welcome emails with all kinds of freebies, bells and whistles. Across all my lists I now have a little over 2500 people, and I'm working hard to at least double this by the end of the year. It's been fun, that's for sure, but because of the focus on it my other work has suffered.

My heroic fantasy--my current main WIP--is sitting at 122k, with no end in sight. I've slacked off a little with it due to the other things I've got going on, but I'm hoping to finish it in Oct/Nov.

I did some rebranding back along, and turned my completely-ignored romance, Finding my World into Broken (Tokyo Lost Series 1) complete with a stunning new cover. The second in the series (these are standalones but they share locations and styles), which had a working title of Tokyo Sonata, will be released under the name of Stolen (Tokyo Lost Series 2) on Oct 25. The book is available for pre-order right now on Amazon, iTunes, Barnes and Noble, and Kobo.

I actually just finished the final proofreading of Stolen tonight and sent it out to my advanced reviewers group, so if you're on that list you should be receiving your free copy soon. It always feels great to complete a task, but it just means that I'm straight on to the next one. And that is the second draft of my YA fantasy, The School at the End of the World. I'm about halfway through it, and I'm hoping to get that book out (and ideally the second too, because its finished) by the end of the year. Fingers crossed.

In addition, I'm working on the paperbacks for Broken and Stolen (and once I'm done with those it'll be the turn of In the Shadow of London), plus Broken is now taking auditions on Audible, so if you're a narrator, why don't you have a go?

So, September was mostly admin type stuff. More than anything I'm really just looking forward to getting back to writing. I have at least the next three books I want to write lined up in my head, so hopefully 2017 will be a bumper year.