How Much is a Short Story Worth?

How much is a short story worth?

I recently ran a free promotion for my short story, The Cold Pools, giving away 2041 copies in three days after it was picked up by the popular free ebook website Ereader News Today.

A couple of days later I received this comment as part of a generally positive 4-star review:

“This little story is very good and certainly worth borrowing, but not I think given its brevity, paying 99 cents for...”

Don't get me wrong, I was happy to receive the review and pleased that the reader took the time to write it, but it got me thinking.  So, this reviewer doesn’t think my story is worth 99 cents.  In that case, what is it worth? And what is 99 cents worth?

There seems to be a growing attitude that just because something is digital and can't be held in your hand then it has no value.  Hence the proliferation of music/movie/ebook piracy, which is effectively theft from the comfort of one's own home.  I have no problem at all with listening or watching something on Youtube, which I consider to be a form of borrowing, but downloading pirated music or movies is stealing, so I don't do it.  I don't care what other people do, but I know I'd be mighty pissed off if there were 30,000 copies of my writing being passed around without my authorization.


Anyway, back to the main thread, the value of a short story.

At the time of writing, The Cold Pools has sold 8 copies, for each of which I made 35 cents. In addition to this it was originally published in 2009 in an online magazine which paid me $15. I paid $3 for the cover image for the ebook, so currently it breaks down like this –

So, not counting the ezine sale, I’m currently making a loss on Cold Pools.

The reviewer’s concern was that the story wasn’t worth paying 99 cents for. Cold Pools is 3500 words long, which is admittedly short for an ebook, although it was packaged with the first chapter of a novel as a bonus (and not a shameless form of self-promotion, honest ... ;-) ). I write at roughly 1000 words an hour, plus these things always take a couple of hours to edit and format. Even saying it took me six total hours to write Cold Pools (which is probably pretty conservative, it’s likely double that at least) it still works out at a pretty measly hourly wage.

Currently, assuming it took just six hours, I’ve made $2.46 per hour from Cold Pools. I’ve sold 8 copies in three months. Let’s say I sell 1000, which at this stage looks pretty unlikely to happen within twenty years. That would be $350, or $58/hour. Much better, although considering I can easily earn $50/hour teaching English it really isn’t that much.

Moving on, I’d like to consider just what 99 cents is worth. I live in Japan, so I’ve done a conversion in order to investigate. 99 cents is 78 yen, which, frankly, is hardly anything.  We have 100 yen shops for a reason, and that is because very little is valued at less.  With this knowledge in hand, I decided to visit my local 7Eleven to see just what was worth less than my story, and what was worth more. 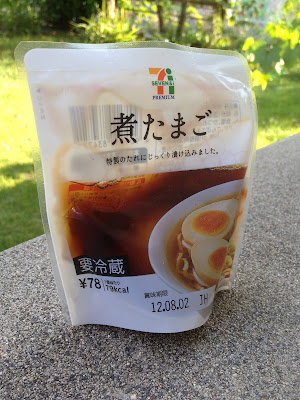 Here it is, the winner.  My story is worth exactly the same amount as this boiled egg, which comes in a kind of soy sauce and is designed to be put into a bowl of ramen noodles.  Now, I know you get a physical product, whereas my story is just a bunch of words on a screen, but its not like the egg and the packaging it comes in is designed fresh each time - it is just replicated on the production line, just like my story.  You see what I'm getting at?  78 yen is probably worth it for the hours it took someone to design that product, even if the number of potential sales is as many as there are chickens. 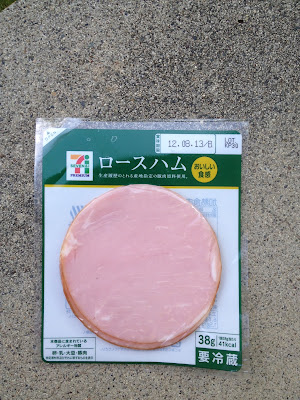 This packet of sliced, processed ham is worth slightly less, at 75yen.  It was one of only perhaps four items that actually cost less than my story.  Among the others were a cheap single meal tub of catfood and a single disposable razor.  There wasn't a single chocolate bar that was cheaper than my story.  Believe me, 99 cents is not a lot. 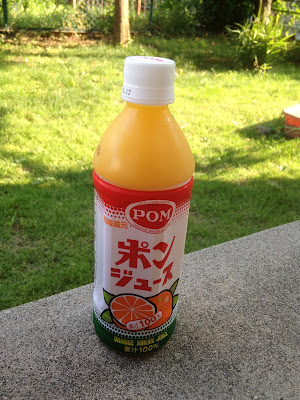 And this bottle of Pom orange juice, at 157yen, is worth almost exactly twice as much as my short story.

I guess it all comes down to how you perceive value.  I welcome all reviews on my work and if people think my writing sucks, then so be it.  It's all up to you.  What does concern me is that a lot of readers don't consider our work to have any value at all.  Do plumbers put in pipes for free?  Do bank managers hand out free mortgages?  Do teachers give free lessons?  Only if they're idiots.

Of course services are products aren't free.  Generally, when something is free it falls into two categories - charity or promotional.  It is the second that directly effects me so I'll focus on that.  Incidentally, on my visit to the 7Eleven I was given this bottle for Lemon Volvic as a service, because I'm pretty much in there every day spending money. 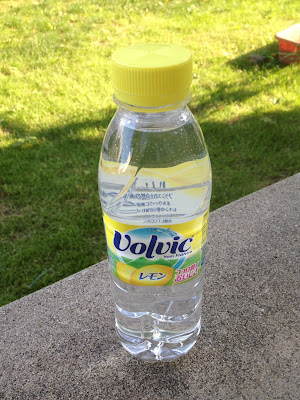 It was a nice gesture, and it was appreciated.  But does it mean that I now expect to get all my bottles of water free every time I go into 7Eleven?  Of course not.  The only point of giving me a free bottle of water was to encourage me to go back and shop there again.  Which of course I will, not just because it is the closest shop to my house but because the staff are nice to me and they stock stuff that I want.  It's no different to when I give my short stories away on Amazon, it's not out of the kindness of my heart, it is with the hope that readers will enjoy them and want to visit my "shop" again.

There are many, many writers out there who are nowhere near as good as me who are making far more money, and there are many far better making even less.  A lot of it comes down to marketing and how good you are at it.  I suck at marketing.  I'm not good at networking.  I'm not particularly prolific at making friends, let alone charismatic enough to make people I meet buy stuff I have written.  I have one novel out at the moment, The Tube Riders.  Everyone who has read it and reviewed it has said it's exciting, original, a great read.  These are not people I have paid or people I know, these are complete strangers.  It's got to the semi-final shortlist of a minor award, and I'm pretty confident it'll make the final five.  It took me three months just to write the first draft, and its currently priced at $2.99, which is less than a 500ml can of beer in my local 7Eleven (beer is pricey in Japan...!).  It's the cost of three boiled eggs, and about half the price of a Starbucks Coffee.  I've sold about 20 copies.  Is it worth this price?  Personally I think it's worth a lot more, but potential customers don't seem to agree.

It is a dangerous world we live in where creative media is considered of less and less value.  Art enriches life, especially good art, and while Amazon in particular is clogged with junk passing itself off as literature, there is still a lot of great writing to be found.  The famous indie writer Joe Konrath talks about a future where the only revenue from ebooks comes from internal advertising, but this is something that fills me with dread.  How far will we go to devalue something that so many people consider an enriching experience?  Something that entertains you or makes you think should have a value, be it music, art, film, literature.  People should be happy to pay for an experience that makes them happy, the same way that they'd pay to go on a rollercoaster or take a parachute jump.

So criticise all you like, but never say my work or the work of all the thousands of other writers, artists, film-makers, musicians and other creative types has no value, because you're wrong, it does.