My story, Joyriders, has just gone up on free promo on Amazon.  This is an oldie, dating right back to 2002, when I was a lot more adventurous with style (something I'm trying to get back into!).  This story was intentionally supposed to be punky and pulpy, with wacky character names and crazy language.  I kept the description to a minimum and went for action instead.  After several years in the wilderness it found a home online in the well-respected ezine Afterburn SF in 2008.  The main reason it was uploaded to Amazon was (as the rest of my shorts) to be used for promoting my novel, The Tube Riders, the original short story of which dates from the same period. 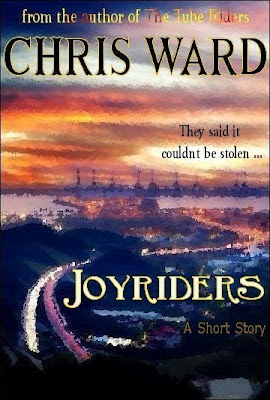 The name of the character Drego from Joyriders, I actually stole for one of the main characters in The Tube Riders.  I even made her a girl.  There is no appearance for either Katie Burn or her lover, but Petey makes a brief cameo.  See if you can spot it!

A little bit of trivia about the cover - the cover image is actually a photograph of Taipei (Taiwan) docks which I altered using a "paint" option.  I really liked the photo but I thought this version gave it a more sci-fi look.  I chose it mainly because of the big sweeping highway in the bottom left corner; highways of course featuring a lot in the story.  I actually visited Taipei last summer; not a traditional tourist location but I thoroughly recommend it.  Very underrated.  If you do go, then be sure to stay at the Roumei Boutique, possibly the best hotel I've ever stayed in.  Ever.  The rooms were as huge as they look in those pictures and there really was a spa with a flat screen TV built into the wall.  And the breakfast ... I still dream about it now.  All at a ridiculously cheap price.

Anyway, I digress.  Download Joyriders and read it.  It really is good, but Tube Riders is much better ...

Email ThisBlogThis!Share to TwitterShare to FacebookShare to Pinterest
Labels: My books, Writing