The History of Miffy

Owning a pet is, in general, a pain in the behind for EFL (English as a Foreign Language) teachers living overseas.  You live under this cloud of impermanence, aware that at any time the rug of your existence could be pulled out from under you, the winds of change will blow and off you go to EFL pastures new.  In general, ex-pats live in rented accommodation, and in general rented accommodation doesn’t allow pets.

One day in 2009, my then girlfriend, now wife, was doing some part-time work up at our local temple when a monk offered her a kitten in a paper bag.  Abandoned by its mother, he said.  Did she want it?  She's a girl, it's a cute kitten ... of course she wants it.  So I get a phone call.  Do I want a cat?  Immediately recognising the difficulty of owning a pet, I was reluctant, but as a lifelong lover of cats I could hardly let the little thing die.  I went and collected it, fully intending – if it survived – to find it a home.

Miffy, as I named the little rascal, weighed just 200g and could barely walk.  That afternoon we took her to the vet for a check up.  Here’s a short video of Miffy that day.

We wrapped her in a blanket and put her in a box that night, fully expecting to find her dead in the morning.  What we found instead was a very lively kitten trying to climb out!  I was very relieved.

Here’s another video of Miffy after we’d had her two weeks.  (These play sessions would last several hours…)

I did ask a few people I knew if they were interested in having a cat, but I found that each time I was willing them to say no.  Within a couple of weeks, Miffy was unofficially ours.  Unfortunately, our horrible spying landlady wasn’t a fan.

Peering though our apartment window one day, she spotted Miffy playing on the floor, and we were given our marching orders.  Yes, we moved house because of a cat, and thanks to Miffy being a very lucky cat for us, everything worked out.

Thanks to my kind school vice-principal, we were able to move into an initially decrepit, but later rather cosy school-owned house in a much quieter area with no such hang ups concerning pets.  Rent was far cheaper, we had a garden, and Miffy had lots of bugs to chase.  We were happy, and Miffy grew and grew.

In November 2011 we got married in the temple behind which Miffy was found.  Miffy was unable to attend because she preferred to remain at home to guard the house instead.

Here's Miffy, fully grown, being cute in a tree.

Now, as Miffy reaches three years old, she is as much a part of my life as everything else.  More a dog than a cat, she sleeps in the crutch of my elbow, wakes me with a nose-nip at 4am (thanks, you stupid cat …), and allows me to “walk” her every evening, trotting along beside me like an obedient spaniel, only rushing off into the gardens near my house to chase birds, bugs or lizards.

I once heard a wonderful quote about cats – “a home without a cat is an empty shell”, and I would have to agree.  Only fellow cat owners can truly understand the relationship between a man and his beast, but is a simple one – I live to serve.  When food or entertainment is required, I beeth there.  And a nip on the nose when I am sleeping is a sign of love. 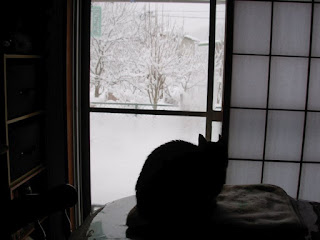