Not blogged in a while, but for those who still read this, my next release will be the third book in the Fire Planets Saga, Fire Rage, out on December 11th.

Pre-order is available now on all Amazon stores. 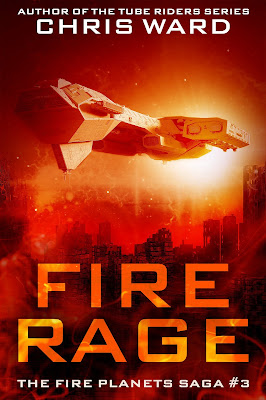 The Endinfinium Series is here!

At long last, my new series, set in the weird and wonderful world of Endinfinium, kicks off on December 1st, 2017 with the release of Benjamin Forrest and the School at the End of the World.

Click the picture or click here to check out the book on Amazon. Until the 15th of December the book will be available for a special price of $0.99, or free to KU readers.

The second in the series, The Bay of Paper Dragons, is available for pre-order now.

Just a short post to say that Warrior: Rage of the Bloodsworn, my first straight fantasy novel, is finished. It came in at a monstrous 232,000 words, by far the longest book I've ever written. My task now is to figure out whether to publish it as a single story or split it into serial sections. My gut wants to go with the first, more traditional option, but my head is telling me otherwise. Mulling it over right now ...


Now that Warrior is on the backburner, I've switched focus back to my YA fantasy series, Endinfinium. The first two books, The School at the End of the World and The Bay of Paper Dragons are finished, so I'll be giving them a thorough working over then publishing them hopefully within a couple of months.


In the meantime, if you're interested, you can download a sample of it right here. You'll need to sign up to the Mailing List if you haven't already, but that's good because then you'll know as soo as the full book is available.

Email ThisBlogThis!Share to TwitterShare to FacebookShare to Pinterest
Labels: chris ward fiction writer, Endinfinium, the school at the end of the world, Warrior Rage of the Bloodsworn

Updates from March and some more giveaways

Hello all, I hope you're well. This is my first post in a while, because as usual I've not had a lot to say. I'm still hard at work on my epic fantasy, which, despite having reached mammoth proportions, I hope to finish sometime in March. Fingers crossed. I'll let you know.

Next up, a couple of promos going on that I thought you might be interested in. Big one here hosted by George Cotronis, in which the eagle-eyed among you will spot one of my books halfway down. And an even bigger one here is about to kick off, hosted by Dean F Wilson. If you're into any kind of speculative fiction you'll be sure to find something you like.

Finally, a mate of mine, Matthew Kadish, has a new book out soon in his popular Earthman Jack series, so if you haven't read it, you can grab the first book in the series over here at his website www.earthmanjack.com

Happy reading, until next time ...!

Chris
Posted by Chris Ward at 03:37 No comments:

Updates and a bunch of free books

Hello again, I hope you're all well.
First I'll get the news and updates out of the way, then I'll let you know about some cool offers going on.
January was a bit of a quiet month for me, writing-wise. I finished editing and published the third book in my Asian rom-sus series, meaning I could dust my hands off and get back to my spec fic after my little genre excursion.
First up for Feb, I'm hoping to get some serious progress on my epic fantasy done. I won't say "finish", because its been in progress since last June already and is well into that old school long-time-to-write-a-book situation that sometimes I actually miss. It's currently a little under 140,000 words, and there's no end in sight. One thing, though. It's awesome. You're going to love it.
Once that's out of the way, I really want to finish up my YA fantasy series. I've got two books written, they just need to be edited. Still, I'm trying to focus on one project at a time this year, rather than multitasking.
Anyway, that's about it for progress updates. Now I'd like to share with you a couple of awesome promotions going on that I'm involved with.
Finally, I just finished another book review which you can view on my website. The book is After the Pretty Pox: The Attic by August Ansel and I thought it was fantastic. If you like post-apoc / survivalist fiction it'll be right up your street. I wasn't sure what to expect because the cover was a bit basic, but the title kind of intrigued me and once I started reading I was hooked. Trust me, that's rare for me. I put aside a Pulitizer Prize-winning book to read this one (I'll be reviewing that soon because it too is pretty awesome).
Anyway, that's all for now. Have a nice week and speak to you soon.
Kind regards,
Chris
Facebook
www.amillionmilesfromanywhere.net
Posted by Chris Ward at 05:15 No comments:

Never one to rest on my laurels, particularly as I get older and older (38 later this month), I've decided to set some goals for this year to generally improve my life and gain some new skills.

Obviously, as I'm a writer, here are the writing goals first:

I'm a new father (eight-month-old daughter) and a teacher in Japan by day, so my free time is limited. However, I still want to make some other small gains to improve myself. Here's what I'm planning to do in 2017:

I'm constantly told I'm overweight and have high cholesterol, so its time to do something about it. I actually used to run a lot - seven years ago this April I ran my first and only marathon - so its not so hard to get back into it. To count as a run, it has to be more than 10 minutes. I've actually done seven so far, and we're only two weeks into January. The longest was 32min, although I did a few shorter ones which were hill climbs or sprints. A sub goal is to get my weight under 90kg. It's currently at 94kg or thereabouts.

Learn to play a song on the piano

I have a keyboard that I can't play, but I've always wanted to try. I've decided to choose just one song and learn it well. I've already decided the song, so I'll post a video if I actually succeed.

Okay, this is one to impress my students (I work in Junior High Schools). I love the idea of learning something completely random, so this is it. As with the piano above, Youtube tutorials are my friend on this.

I live in Japan, but my Japanese is rubbish. However, my favorite section is the characters (kanji), and I can actually read Japanese quite well. The JLPT Level 1 test is rock hard, and is considered native fluency. However, its only multiple choice, so I have a chance with the kanji. I have already passed the 3rd level test, but the first is a massive step up. Note that I'm not expecting to pass the whole test - I have no chance! - just the kanji section. And it will be informal - I'm going to download a practice test and try it, not pay a bunch of money to take the full test.

How am I going to do all these things? Writing is obviously my priority, and jogging is something I'll do at random, but for the others I'm planning to devote roughly an hour per week on each. I would like it to be more, but I get a couple of hours free time per day at best. It will be a challenge to see how much I can cram in.

So, that's me. If you're also doing some kind of self-improvement challenge this year, feel free to let me know in the comments. Good luck!

Introducing Visions of the Fall, a monstrous book of dark and dystopian fiction from some of the best authors around. More than one million words of fiction to keep you entertained, including my book, The Tube Riders: Underground.

Get in there now because the introductory price of $1.99 won't last forever. Click the picture to view the boxed set on Amazon. 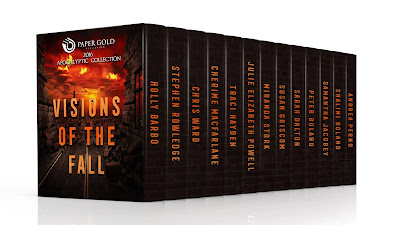