Just like all writers, I love getting (nice) reviews.

Tube Riders had been a bit of a review black hole since June, but since the sampler of part one went perma-free at the beginning of September I've had a small clutch of them.

This book had me reading until the sun came up and even then I did not want to put this book down. Amazing plot with new twists every five pages I would recommend this book to anyone

I highly recommend this book. The characters are engaging and dynamic. The story line as lots of twists and turns. Very good read!

I gave this book 4 stars because it was original, entertaining to read, and gave me a new way to ride the subway! Crazy kids...they'll try anything just because the world is ending!

and Greg Strandberg posted one on the sampler itself -

This book grabbed me right away with the fast and action-packed train sequence in the beginning. The dialogue and character interactions kept things moving after that. It's clear that Ward likes to put some off-putting dialogue to work, which adds a gritty realism to the world he's created. Looks like a good start to a fun series!


You guys are all awesome. Thanks so much.

I don't usually post anything about reviews because they're not for me but for other readers, and I believe that all readers are entitled to their opinion, good or bad. Provided the review is fair (and actually about my book) then I welcome all and any. Sometimes, though, on bad days when the books aren't selling, a few nice reviews can really cheer you up.

If anyone's wondering, I'm editing Exile. About halfway at the moment. Still hoping to have both Exile and Revenge out by Xmas. This weekend I spent Saturday cutting rice and Sunday concreting, so unfortunately I have a busy "real" life, but I'm doing my best. Bear with me!

End of the Road - free anthology

If you're interested in discovering new authors, I was recently published in a rather fine anthology featuring a whole host of really good writers across a variety of genres. From huge sellers to unknowns, there's a massive scope of talent in there and the best thing is that it's completely free.

You can pick up a free copy from Amazon US here or Amazon UK here.

End of the Road

Roads end. They begin somewhere, too. In between, all manner of things happen: friendship, betrayal, horror and maybe even joy. For some, the End of the Road brings love and happiness, for others agony and suffering, and for a precious few, sorrow may lead to something revelatory. The potholes and pitfalls found in this anthology are many, but for every character, there is an end of the road.

This road ends in a collection of short stories by 31 of the most gifted writers of our time, with stories from action and mystery superstars Russell Blake, Traci Tyne Hilton and Mike Meyer; romance stars Jeannette Raleigh, C A Newsome, Suzie O'Connell, Kathleen Steed and Anna J.McIntyre; and from cutting edge science fiction and fantasy authors Saxon Andrew, Stephen Arseneault, John Daulton, and JRC Salter; post-apocalyptic and dystopian authors Brandon Hale, Scott Langrel, Dale Roberts and Jess Mountifield. Intended for lovers of short fiction everywhere, the End of the Road is a must read for anyone intent on keeping current with the literary scene.

Just got back from a little vacation in the UK to spend time with my mother on her 60th birthday and see my sister's new baby. Back now at the computer desk and ready to get going on getting the next books ready. 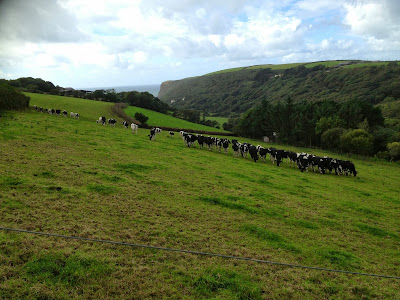 This is a view of the valley I grew up in, Crackington Haven, during a rare break in the rain.

Stay tuned for news of release dates. I'm pretty much going to shut up now and get the next Tube Riders books done.

The Tube Riders: Part One - London is now free

For anyone wanting to test drive Tube Riders, part one of the first novel, approx. 215 pages, is now free on Amazon. 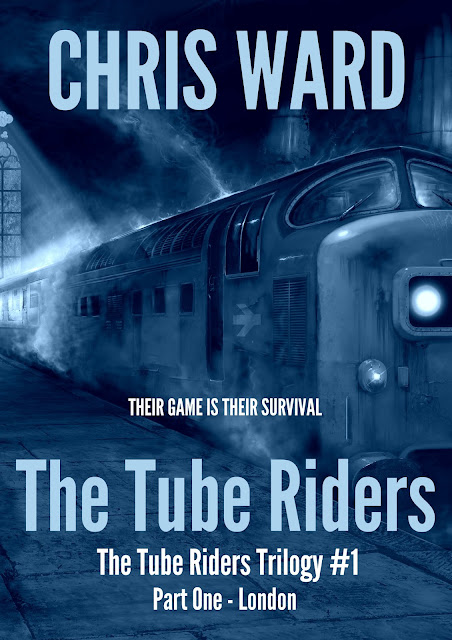 Using the original artwork from the first edition of the novel, I hope that this will allow readers to decide whether they want to continue reading the remainder of the series.

Download for free from Amazon US here or Smashwords here.

Yesterday I hammered out the last five thousand words of Tube Riders: Revenge, finishing the book up at ten minutes to midnight.

Then I had a little cry, and after that I went to buy a beer. Then I went to bed and at three thirty a.m. I got back up to feed the cat. Such is life.

That's it, done. You have no idea how I feel right now. Partly empty, with a huge gap in my free time that I'm going to fill for a couple of days doing absolutely nothing (okay, so I'm going to read a book, or maybe edit a couple of short stories, or write one or two more ... okay, you get it, I have no trouble filling my free time, "free" is a concept that doesn't really exist), and partly relieved. It's over. It's finished.

I wrote the short story Tube Riders in 2002. It was published in a special edition of a little magazine called Not One of Us in 2007 and I later published it myself in my collection Ms Ito's Bird and Other Stories.

In 2009, looking for a novel idea, I turned my mind back over my short stories and thought that the one with the kids hanging off the sides of a train might work. I got a piece of A3 paper, covered it with lines and scribbles, and what would become a 600 page novel was born.

It was originally never intended to be a trilogy. I don't like series - I don't like reading them and I don't much like writing them either. I actually prefer books which have a single enclosed story, but I found at the end of The Tube Riders that it was just part one of what would need to be a wider story if I was to really show what happened to the likes of Marta, Switch, Paul, Owen, Dreggo and even the horrible old Governor.

Until I come to self-publish it in March 2012 I had no real motivation to write any more. I had failed to sell it to publishers despite it being everything a commercially successful book needs, and I felt pretty much down about the whole writing thing. At pretty much my lowest ebb as a writer, I decided to give it a shot out in the world and it did okay. Not spectacular, but the reviews were decent, and finally I really felt like I needed to complete the story.

I wrote Tube Riders: Exile (TR#2) between September 2012 and February 2013. I hadn't really written anything in three years up to that point, and while its got a good story I was a bit ring rusty. I worked for a while on editing it, but then released that the third part in the trilogy, Revenge, was calling out to be written. So I shelved Exile for a while and got to work.

Thanks to the encouragement from several writer friends, I busted my ass to get this book done. And in less than three months - the quickest I have ever written a novel - I got to the end.

At 132,010 words, the first draft is a lot short than both book one and book two, but I tend to add a lot of detail in when I rewrite, so it'll probably end up a similar length. I think it's a good book. It's tighter, leaner and is absolutely relentless. There's no fat on this book at all, and I think it's a worthy end to the trilogy. I as certainly cut up writing the final scene yesterday.

So what happens now?

First, I'm going on holiday, next week in fact. I'm going to stay away from writing and stay away from the internet as much as possible - unlikely, but I'll try ... - and just relax for once. At the same time, though, I'm going to reread book one and make any minor changes that I feel necessary. I won't be changing the plot, but its my book and with the series now finished there might be one or two places I feel that clarification is necessary so I'll do what has to be done. Plus, a polish never hurts. Apologies to anyone who's read it who feels the need to read it again - you can get a free update from Amazon.

Then I'm going to begin the biggest task - revising Exile. I'm feeling sharp now and in control so it shouldn't take too long. Then, now the cover is done and the formatting has been commissioned I'll be putting it out for your appraisal. And then it'll be on to Revenge.

I want both books out by Christmas. That's the plan. I want all those little Tube Rider computer pixels to be filling virtual stockings on Xmas Day, and then you can all find out what happens in the end to Marta Banks and her friends. It'll shock you, it'll horrify you, and it'll make you gasp with excitement. It'll be worth it, I promise.

In the meantime, thanks for sticking with me. The story is told. That's the hard part. Now I just have to get it cleaned and dressed and ready to step out into the world.