In between writing the new Tube Riders book, I've been doing some editing on Crow 4: The Circus of Machinations, which I'm still hoping to have out by the end of the year. In this episode we find Kurou in vastly alien conditions, hiding out in a backwater town in Siberia as the threat of an unseen invasion army slowly chokes the town. We also meet a brand new protagonist, the softly spoken but put-upon inventor, Victor Mishin.

Here's the beginning of the prologue. Look out for more excerpts coming soon.

Prologue
The robot and the inventor

A cold wind was whipping in from the south, bringing with it flurries of hard ice ripped off the top of seasons-long snow drifts standing like dirt-streaked grey sentinels by the side of the road. Victor Mishin stopped one more time to tie up his hood, but the string was frozen stiff. He scowled, cursing under his breath. Dipping his face away from the wind instead, he turned back to make sure the cart was still following.
From both sides of the road, the dead eyes of Brevik’s abandoned houses watched him with their broken door grins. From inside flickered torchlight, accompanied by the faint peal of nervous laughter. Many became temporary crack houses and brothels after dark, living crypts filled with the skeletal remnants of men and women put out of work by the closing mines and factories.
The first rock to clang off the outside of the cart’s casing made Victor jump. The echo of laughter from a shadowy alley that followed made him shiver.
‘We see you, old man.’
It was the voice of a kid, throat dry from too many cigarettes and cheap local homebrew. Brevik started its youngsters early, and only a kid would ever call him old. Victor wasn’t yet thirty.
‘Come on,’ he told the cart. ‘We have to hurry.’
The machine’s head snapped up, a vaguely humanoid oval. Twin lights at the front gave a wild flicker. ‘Rolling, rolling.’
Another stone landed in the snow at Victor’s feet. He grimaced. Even the prepubescent kids were built out of wire passed down through generations of miners with playful fists, and Victor was no fighter.
‘Level up,’ he said to the cart. ‘We have to move. Now.’
‘Roger that, partner.’
The cart, a silver rectangle, rocked back on its caterpillar treads and lurched into an upright position. Smaller central treads unfolded from the ends of its main propulsion system. It was activating its sprint mode, but in the snow and ice its motors would only last a couple of hundred metres. It would have to be enough.
‘Move it,’ Victor said, as another stone clanged off the cart’s casing.
Shadows shifted behind him as he started into a run, morphing into the shapes of four, five, six kids as they bolted from the alleyway. Victor squeezed his eyes shut as the cart’s accelerator runners spun in the snow, then clunked as they caught on something buried under the surface.
He didn’t want to turn around to see his most treasured invention pitch forward onto its robotic face as the group of laughing urchins descended on it, thrown stones rattling off the metal like machine gun fire, but he had no choice. The cart was dear to him; he owed it a single icy tear frozen against his face by the chilling wind.


He glared for one long moment at the feral children as they engulfed the cart in a flurry of thumping hands and kicking feet, then turned and hurried for home, feeling at least some scant relief that its sacrifice had allowed him to get away.
Posted by Chris Ward at 00:04 No comments:

The first three books in the Tales of Crow series are now available for purchase so within the next few weeks I'll be bundling them as a boxed set in anticipation for the fourth book in the series, hopefully by the end of the year.

Watch this space for a release date (most likely early November). In the meantime, here's the cover: 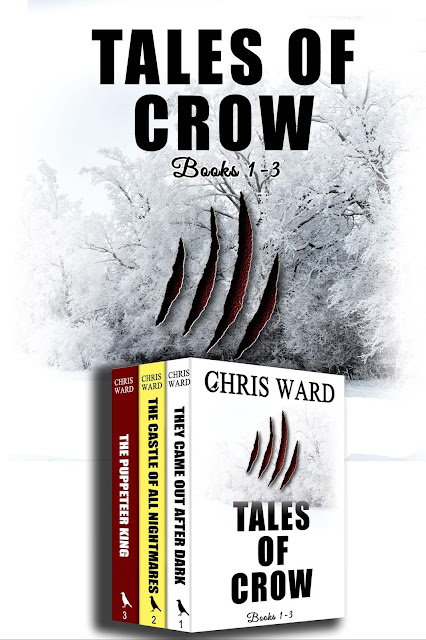 Email ThisBlogThis!Share to TwitterShare to FacebookShare to Pinterest
Labels: Jun Matsumoto, the puppeteer king, the tales of crow series, They Came Out After Dark

Obviously I have a day job and generally am a badass sci-fi writer by night. Sometimes I have to write stuff for work too though. I'm an assistant English teacher in a Japanese junior high school, and a teacher asked me to write a speech about my childhood dream. This is what I came up with. It's kind of true and a little poignant haha. I can still remember asking my mother to buy me a power sword. I think I was about five, but who knows haha.

My Childhood Dream
By Chris

When I was a small child, I wanted to be a superhero. I watched the news on TV, and saw that there were a lot of bad things in the world. I wanted to stop these bad things. So one day I asked my mother to buy me a power sword from the supermarket. She said okay, but that night she told me that the supermarket had sold out of power swords, so I couldn’t become a superhero. At that time I felt very sad.

I learned that to be a superhero you don’t need to have a power sword, because the power to change the world comes from your heart.