And the covers are in!

Here is the exclusive reveal of the covers for my next novel, Head of Words, which is tentatively planned for a late March/early April release. 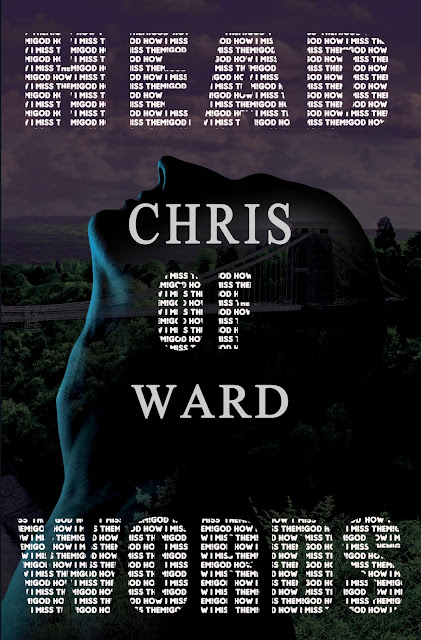 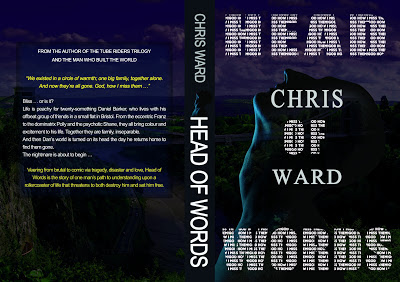 There are again the wonderful work of Su Halfwerk at www.novelprevue.com, who designed the covers for both The Tube Riders and The Man Who Built the World.  What I like most about these covers are the talking points, in particular the words that make up the titles and the bridge in the background, both of which have a lot of significance to the story.

Head of Words is coming soon!

My next novel, Head of Words, is tentatively scheduled for a late March/early April publication date. I've never been fond of repeating myself so rest assured this novel is completely different from my other two novels, The Tube Riders and The Man Who Built the World. While it has aspects of fantasy and horror it is also heavily influenced by the six months I spent living in a bedsit in an unsavoury part of Bristol post university, so there are a lot of social issues in it too. Hopefully people will enjoy it just as much, though. With this book, as always, I was attempting to push myself as a writer as well as the boundaries of my storytelling.

Here's the blurb for you to feast your eyes on.  The cover will be coming soon.


“We existed in a circle of warmth; one big family, together alone. And now they’re all gone. God, how I miss them …”

And then Dan’s world is turned on its head the day he returns home to find them gone.

The nightmare is about to begin …

Veering from brutal to comic via tragedy, disaster and love, Head of Words is the story of one man’s path to understanding upon a rollercoaster of life that threatens to both destroy him and set him free.
Posted by Chris Ward at 20:36 No comments:

I'm in a good mood today so I thought I'd post this tiny little snippet from near the beginning of Tube Riders: Exile.

Can you guess which character this is?


The rushing wave forced his mouth and his eyes open. His vision blurred and he felt bitter, salty water pummeling its way into his lungs. He felt himself tumbling over and over, dragged under, pulled back down, caught in a death roll. Sharp rocks lacerated his clothing and slashed fingers of blood across his skin.
Then, for a brief moment there was air, and he howled like a dying man as water burst out of him, seconds before the next monstrous wave crashed down upon his head, dragging him back under.
He thought of his family, of his mother’s arms. He remember how she had kissed him in the days before, told him how much he was loved.
The water battered him again, and he saw himself being torn away from his family, dragged down into a black mine of hell that would turn him into a monster with a dark, cancerous hatred in his heart.

Email ThisBlogThis!Share to TwitterShare to FacebookShare to Pinterest
Labels: My books, my writing, The Tube Riders, Tube Riding, Writing

Tube Riders: Exile - What happens next?

Yesterday, after five and a half months, of writing, I finished Part 2 in my Tube Riders series, titled Exile. It rocked in at 145,166 words or in readers' terms 530 pages.

So, the first draft is done. What happens next?

I see a lot of writers just rushing their books out, sending their first drafts off to an editor the day after finishing. I'm going to go old skool with mine and leave it on a virtual shelf to mature for a bit. The draft is done, but I have to decide if I'm really happy with the story as it is. For example, less than twelve hours after finishing I came up with a couple of small changes to make in the last scene, including one important confrontation that wasn't in the original manuscript. These are changes I'm going to make and there will be others, too. My drafts tend to be fairly sparse, so there's a lot of room to add stuff in.

I'm aiming to let it sit for about six weeks before I actually read it over. That should be  enough time for me to look at it more objectively. Once I start reading I'll aim to tighten the existing text, add more detail, get rid of as many basic typos as I can (my first drafts are littered) make sure the characters - particularly the new ones - maintain the same "voice" all the way through, hunt down and kill any plot holes, and try to make some of the more unbelievable sections as believable as possible.

Then, once I'm satisfied with it, I'm going to make it ready for the world.

These will be a small group of people who get to read through the draft. I have a couple of volunteers but I'd like five or six so if anyone else would like to ...

These people will have a direct influence on the final story. They get to tell me which bits sucked, which bits are stupid, which characters are lame. If I agree, I'll fix it.  If they all say the same thing and I don't agree, I'll probably still fix it. While it's unlikely I'll agree to bring a dead character back to life, or a kill a character that survives, I could be persuaded to kill them differently, or give them a bit more of a beating in lieu of actually killing them. I'm open to suggestions!

I edited Tube Riders 1 myself and I kind of got away with it because it had been three years since I had looked at it and the whole manuscript felt like someone else had written it. I was able to edit it as if I was editing a book for a stranger, but time it'll be a little more difficult, because I don't want to wait three years before getting this book out. A copy editor will aim to tighten up the text in sections I've missed, spot repeated words, that kind of thing.

I may or may not get the same person to do the proofreading, but I learned the hard way that you can't do it yourself.  When I first put Tube Riders out last year it had more than a 100 errors in it, and it took me six different volunteer proofreaders to get them all out. This time I'm going to get it done before I release the book. It's way too important to go out with errors in this time. I'm learning slowly, but I am learning.

Same as the above - I put Tube Riders out myself and the first edition had some bad formatting errors, sections that were all in bold, sections that didn't have intents, etc. Again, I'll probably pay someone to do it for me this time.

Obviously a book needs a cover. I'll probably start planning the cover while I'm doing all of the above so that there is no delay once the book's ready. For this one I'm going to get Marta Banks on the cover as she's my leading lady. Not sure how yet, but it'll make a nice change from the scary Huntsman on part 1.

I'm going to put the book out on all formats this time, not exclusively through Amazon. This will mean that I can't do free promos, but I will be able to do bargain books and also giveaways I arrange myself.  While I like the KDP free promos as a way of reaching a wider audience, I've been hit by far too many bad reviews by people who don't even like my type of book yet just download it because it's free and then complain about it. I've had enough of that. If a sci-fi fan hates it that's fine, but I'm tired of people who don't even like sci-fi slamming it because it somehow didn't manage to transcend a genre that they don't even enjoy reading. Tube Riders 1 will also be coming out of Select at the next opportunity, which is late Feb. My standalone books will stay in for now, as I don't mind a hit or two on those.

What am I going to do until March?

Write! I have a ton of stuff that's been put on the backburner while I got this done. I have a novella to finish, a short story collection and two novels to edit for starters. Then I'm going to play around about, maybe write some poetry, or a few stories about my cat ... We'll see. Once this book is done I'll get back to work on part three. Looking forward to it!