After just a few days on sale I decided to update the cover for Five Tales of Horror.

This is the original cover. 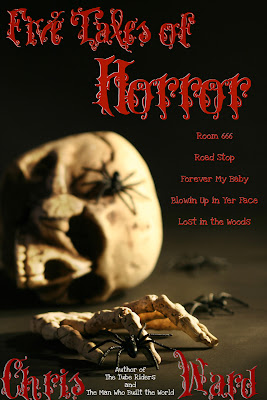 I think that's a great stock image and I liked the spooky writing, but I realised you can barely see it in thumbnail size. So I gave it a refresh, changed it to the same font I've been using for all my short stories, and added a slight red tint.

This is the new one. A little snappier, I think. 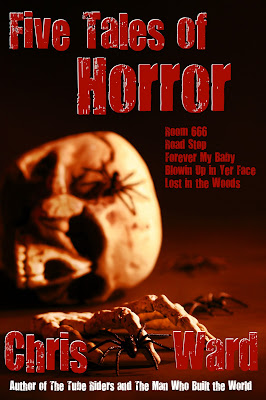 Just to prove what I'm getting at, this is them both side by side in small size.

I think you'll agree that the second is a little nicer to look at. Looks a touch more blood-curdling too!

I gave it a sneaky little free promo this week, and I gave away about 240 copies. That's hardly anything for a free promo - in the first promo for Man Who Built the World I gave away 360, and I sold one copy in the following week - but I sold a couple in the days after. Then, when I changed the cover, sales "took off". I've actually sold 12 copies now. Compare to this time last year, when I gave away 2000 copies of Cold Pools, and sold a massive 9 copies after the promo. I'm actually quite proud of this little collection. It even got a five star review this morning.

I'm not really expecting to make any money (it would need to sell 40 just to pay for the stock image I licenced) on it. I consider these mini collections as free advertising, but if I make any sales its a bonus. Very pleased so far!

Email ThisBlogThis!Share to TwitterShare to FacebookShare to Pinterest
Labels: Five tales of horror, My books, The Hunger Games, The Man Who Built the World, The Tube Riders