A Gallery of Tokyo Street Signs

Here are some pictures I took while taking a walk through downtown Ueno a couple of months back. 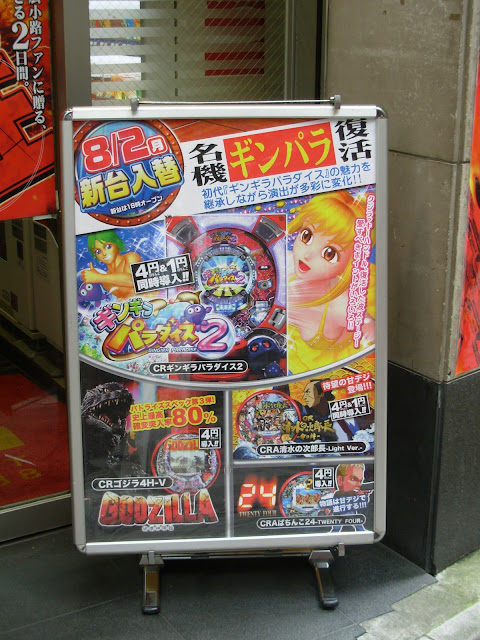 This one is advertising "Pachinko", an extremely boring form of pinball where you feed the money in then sit back and wait.  Gambling is officially illegal in Japan, so if you win you'll be given something random (like cigarettes, or even plastic combs) as a prize, which you can exchange for money in a booth next door.  Needless to say, few foreigners are interested in it. 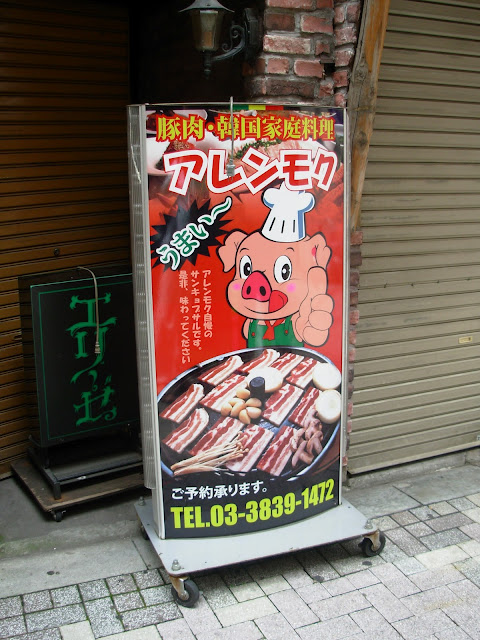 This is a advert for a Korean-style cook-it-yourself restaurant, specialising, not surprisingly, in pork. 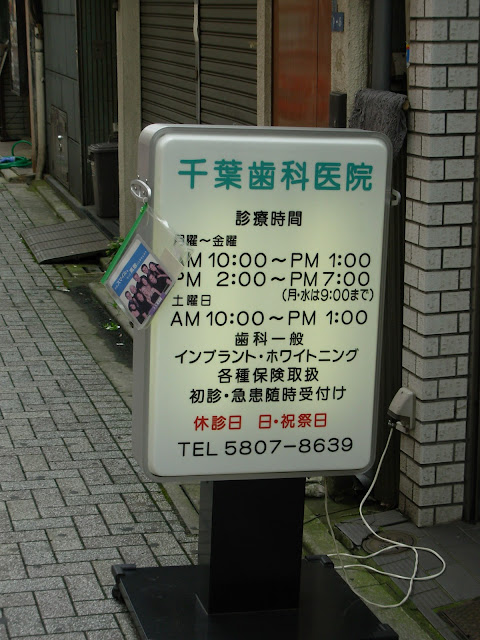 This is a dentist.  I'm not quite sure what that is hanging off the side ... 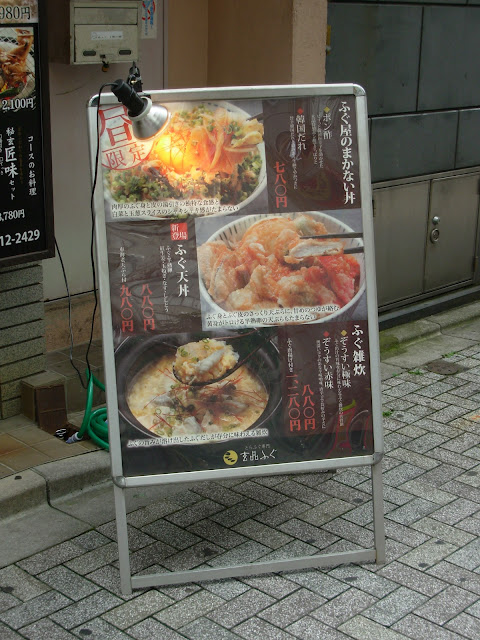 This is a restaurant specialising in "fugu", or pufferfish.  While these restaurants are known for being expensive, this is perhaps the specials board because these dishes are reasonably priced, with dishes from 780 to 1200yen, which is pretty cheap. 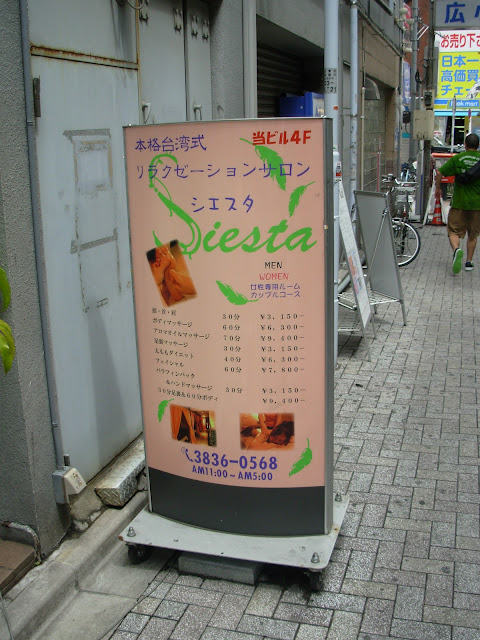 This is a regular massage palour (the normal kind!). 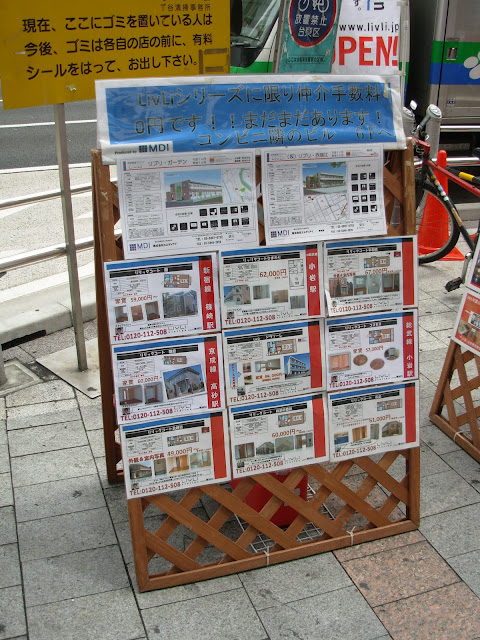 This is an letting agency's offers board.  Around 62,000 for a single room apartment is considered normal for Tokyo, but very expensive everywhere else. 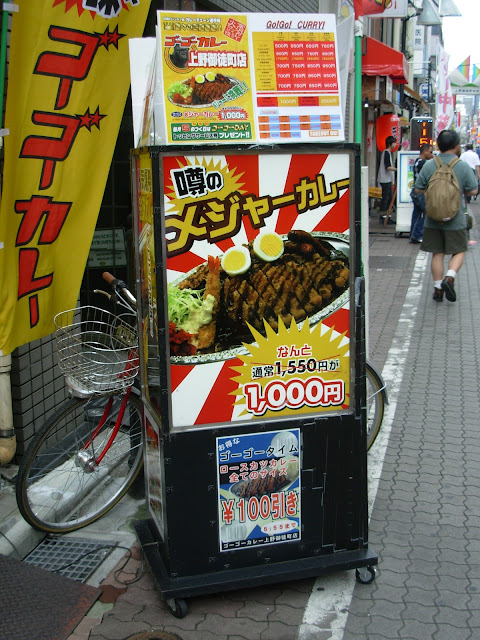 The sign says "major curry".  You get a chicken cutlet, egg, fried shrimps, and something I can't identify dumped on top of a bowl of Japanese curry and rice.  Looks delicious, and is pretty cheap too! 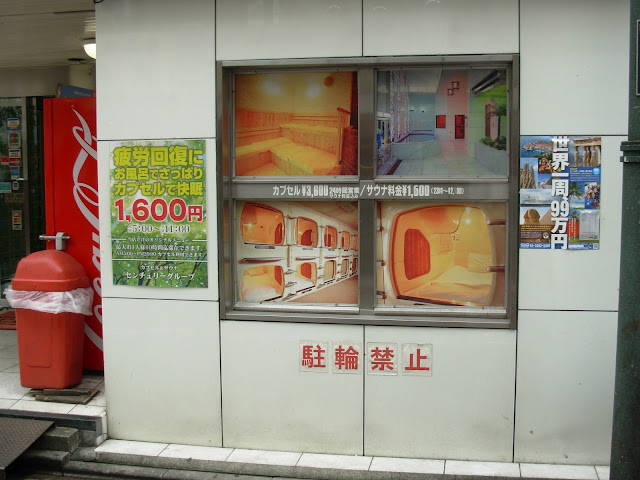 This is an advert for a capsule hotel.  While they look like coffins they're actually pretty comfortable.  However, often they cost very nearly the same as a cheap hotel, so are only really useful if you miss the last train and can't find anywhere to stay.  I've stayed in a few (not this one) and they vary in quality from very nice to very bad.  The big city ones are usually pretty good. A "rest" (or "love") hotel.  That lower sign is for a two-hour "rest".  In the big cities they are everywhere, and despite the seedy connotations, the largest percentage of clientele is actually married couples who need some privacy away from their families.  In Japan you tend to get the grandparents and the grown up kids all under the same roof, and the houses are not exactly soundproof! 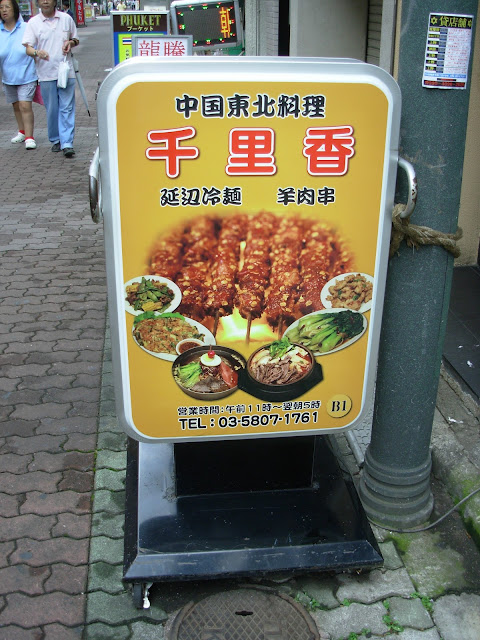 This is a Chinese meat-on-sticks restaurant.  Chinese food in Japan is often very different to what you see overseas (in the UK, for example).  In general, I've found these kind of restaurants to be a good deal, cheap and with large portions, if a little oily.

I hope you have enjoyed my gallery.  I will add more pictures as I collect them!