Well, it's that time of year in my part of Japan where the cherry blossoms are out and everyone is all excited about "hana-mi", literally "flower-viewing".  While the only Sunday I had free for a hanami party was pouring with rain, I still took lots of nice pictures of the area around where I live of the trees in "manten" (full bloom). 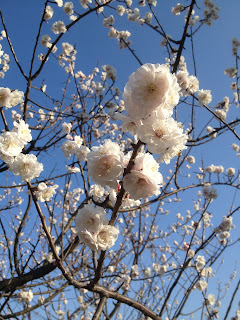 The most popular type of tree is the "sakura", or "cherry" tree, which is a light pink colour.  You can't actually eat the cherries that grow on the trees after the flowers have gone, although they are used as ingredients in lots of stuff, such as Japanese sweets. 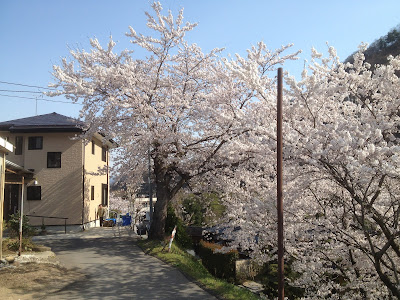 These sakura trees are near my house (although that's my neighbour's house in the picture).  The area is moderately well known, and has lanterns hung from the trees during April so there is a pretty light-up effect during the evenings. 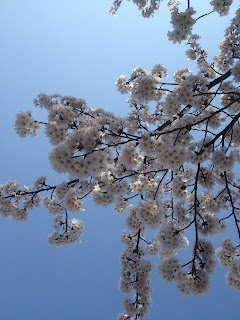 "Sakura" is actually a popular girl's name in Japan.  I have a goddaughter called Sakura, and come across the name fairly often when I'm teaching at high school. 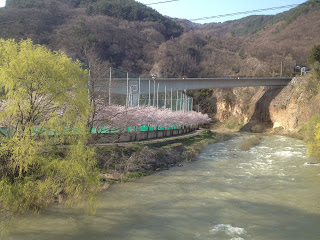 This is a river near my house with a line of sakura trees in bloom alongside my high school's baseball field, with a road bridge in the background. 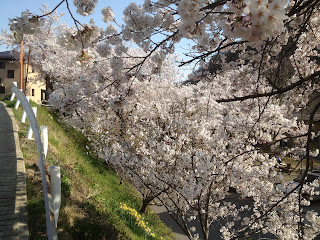 More trees near my house. 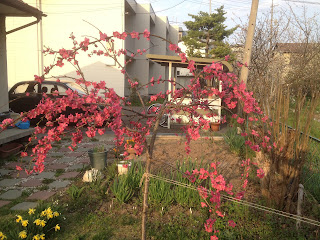 There are two other types of tree that look awesome when they flower at this time of year, "ume" (plum) and "anzu" (apricot).  This is my ume tree (the string is to straighten it as it was growing a little wonky), and it flowers a deep purple.  It's only about four years old and this was the first year that it looked really full of flower.  Unfortunately there is no angle from which to take a picture without there being something unsightly in the background.  Like the sakura cherries, you can't eat the plums that form directly, although they're used for a variety of different foods, as well as being pickled to make the wonderfully sour "umeboshi", which I love, and which are apparently very good after exercise.  Ume can also be used to make "ume-shu" (plum liquor).  It takes about a year for the plum taste to fully infuse into the liquor - last year's 8 litre batch should be ready by July ...