Setting up your ad

As part of experimenting with what does and doesn't work in terms of advertising my book, The Tube Riders, I decided to sign up for a short Facebook Ad campaign.

Just as a disclaimer - this post is not intended to tell you how to make a bunch of sales using Facebook, only as a guide to how to set up an ad.  I will comment on my own success or lack thereof at the end.

Years ago I used to work in the head office of a bank and it was my responsibility to get company bills paid.  For expensive bills I was required to get an executive signature, and there were a couple of times I had to visit the company CEO in order to get cheques for Yahoo advertising in excess of 1,000,000 pounds signed off.  Therefore, I was a little worried when I started my ad campaign that I’d end up entering a wrong setting and getting hit by a monstrous bill.

Despite my nervousness, I actually found it quite straightforward to set up.  What you have to do first is set up your ad. 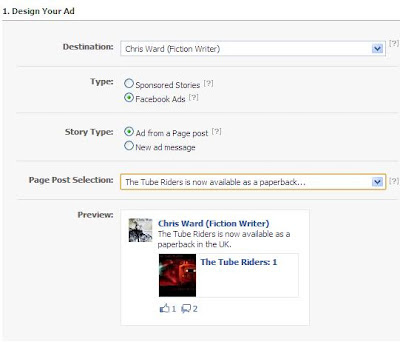 First up, come to this screen, where you choose the page you want your ad to represent, then the type of ad you want.  You can use a page post, or make a new ad.  Then at the bottom, you get a preview of what your ad will look like. 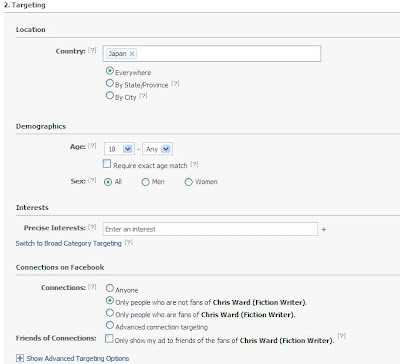 Next, you have to decide who sees your ad.  This is a pretty important section, because you choose the countries, the demographics, and most importantly, the precise interests of the people who will see your ad.  At first, I just chose all the English-speaking countries (I live in Japan, hence the default country you can see), but as I wised up I started to narrow it down to those I thought would most be interested.  For example, as an indie writer, I chose "reading", "kindle", "science fiction" etc, and then a selection of books I thought were similar to mine, such as "Hunger Games".  I also added in a couple of categories in similar genres that I thought would be popular, such as "Star Wars" and "Harry Potter".  At the bottom you can choose whether the ad is shown only to strangers, or to people who already have a connection to your page, and their friends.

At the same time, on the right of the screen you will see this little box which changes as you narrow down your criteria.  This shows the total number of people who might see your ad.  Of course, this isn't the number who will see your ad, because that depends on how much you are willing to pay to get the advertising slots available.

Finally, you have to decide how much you want to pay.  You choose the total you want to pay, over what time frame.  If you click the arrow next to "budget" you can select a "lifetime budget" option, which basically means that whatever you chose to pay is the total for the whole ad.

Under this you select pricing - whether you want to pay for impressions (which is how often your ad is shown) or for actual clicks ("Likes", etc).  Then you select the actual amount you are willing to pay per click.  It gives you an estimated price per click, but I found that you could set the "bid" price a lot lower.  With my campaign, which targeted around 30m people, I could get the bid as low as about $0.12 and still get Likes.  Obviously, the more you bid, the more often your ad will be shown and the more clicks you'll get.  And of course, the more you'll pay. 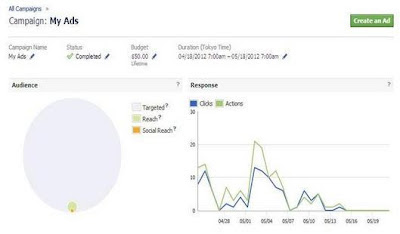 This screen, which will appear at the bottom of the one above, is your stats.  This tells you how many people have seen your ad within the time you select from the drop down menu (please not that these figures are mostly zero because I copied this screen after my ad had finished running).

I set out with the intention of gaining some exposure for my Facebook writer's page (which, incidentially, you can view from clicking the link to the left of this post ;-) ).  I was under no illusions that it was a way to sell hundreds of books, so I set myself a fairly low budget ($50) and set my ad to run for a month.  In that month, I continually adjusted my perimeters, narrowing down the precise interests of the people I wanted to view my ad, as well as dropping my bid price as low as I possibly could.  When my bid price was around $0.40 per click, I was getting around 30 new Likes per day.  When I dropped it to about $0.15, that number dropped to about 10.  But I was in no hurry.

Ah, the big question.  In short, to break your hearts, I couldn't identify a single sale being as a direct result of my Facebook ad campaign.  By the end of the month I set the ad to run for, I had spent about $25 (out of interest, I was billed roughly once a week, to my credit card - when you set up your ad you have to specify billing information) and had gained about 225 Likes from more than 100,000 people who saw my ad.  Why didn't I get any sales?  There could have been a number of reasons - one is that in general my book is not very successful (yet ...!).  It has just come out and my sales are in the low double figures.  Also, I don't hassle people - I only post to my author's page when I have something an important announcement.  And very importantly, a lot of the people who liked my page were "serial Likers".  I have been on Facebook about four years and have only liked 53 pages, yet some of the people who liked my page have several thousand Likes, meaning they pretty much Like whatever is thrown at them.

It was an interesting experiment.  While I can't say that it has helped me sell my book, I do think the exposure may prove useful in the long term, and marketing a product is not something that happens overnight (Oh, how I wish it was...!).  I'm not one of these Facebook haters who thinks the company is trying to take over the world and violate privacy blah blah blah, and I will say that setting up and running the ad was a remarkably user-friendly process.  It's all very self-explanatory, and once I got over my initial nervousness it was easy to do and easy to update if I decided to change my parameters.

Anyway, I have to go and look for more ways to market my masterpiece now.  I hope you found this post useful and I welcome any comments below.

Email ThisBlogThis!Share to TwitterShare to FacebookShare to Pinterest
Labels: how to set up a facebook ad, My books, The Tube Riders, Writing