The jingle of little bear bells and the hiss of cheap transistor radios fills the air ... that's right, its the start of the Japanese hiking season.

My traditional season opener is the 1917m Mount Iizuna, the nearest significant mountain to my house and Nagano City.  Here are a number of photos of my hike on Saturday May 19th. 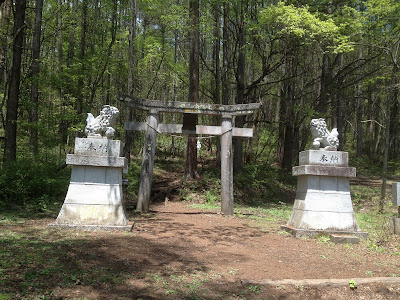 A little shrine gate and a couple of fearsome dragon statues guard the hike entrance, which starts at 1205m. 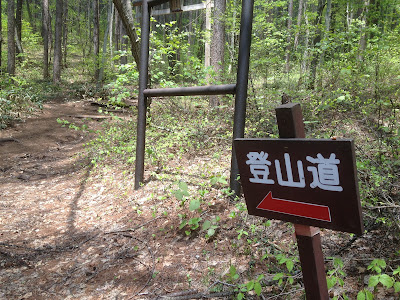 This sign, a little up from the entrance proper, reads "to-zan-do", which translates as "climb-mountain-road". 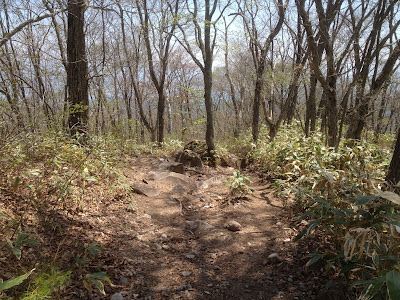 The path pretty much looks like this for the next hour of walking. 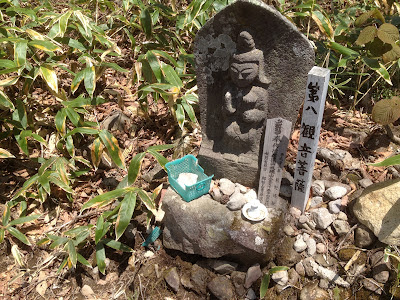 Every so often you come across one of these little statutes, where people leave offerings of coins or sometimes sake (Japanese rice wine). I can only imagine what would happen to these in England - there'd be no statutes left, let alone the cash or booze. 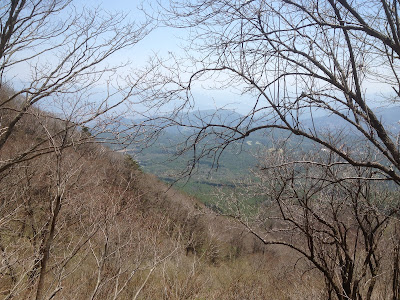 About 45min into the hike the views start to appear. 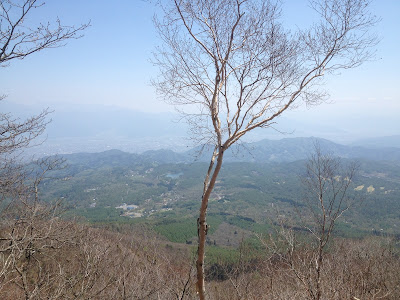 Here, about halfway up, you can see Nagano City in the distance, beyond which are the mountains of Ueda Sugadaira. 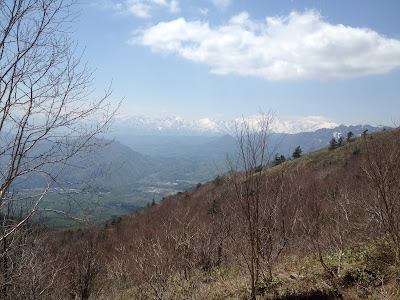 Near the top now, you can see the mountains of the Northern Japanese Alps in the distance.  The best time for views is spring or autumn, as the air is a lot clearer.  In summer, by mid-morning its often too hazy to see anything clearly. 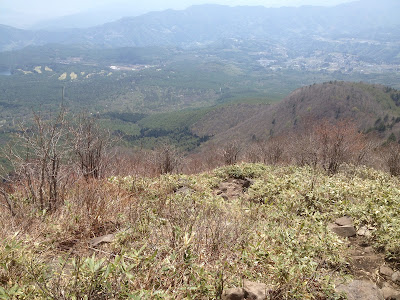 Near the top the trees start to open out.  The bamboo here is all flattened down because the snow has only recently melted.  Most of it anyway... 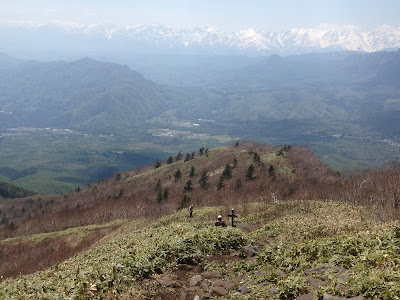 Another shot from the near the top.  Another hiker can be seen just lower down, gazing out at the view of the Japanese Alps.  A few of those mountains top 3000m and are great hikes.  I usually do a couple each year, although most of the tallest require two days. Luckily most Japanese mountains have hotels on the top... 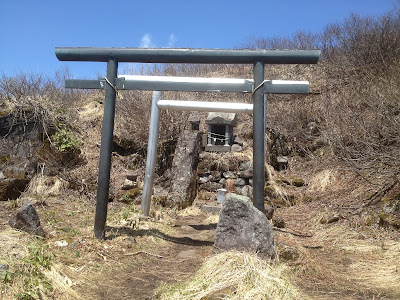 A little shrine just short of the peak. 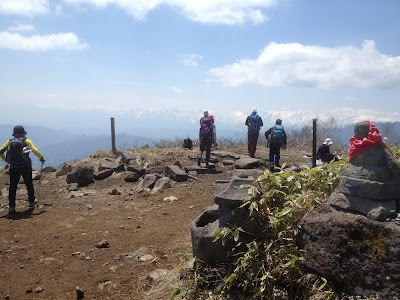 Some hikers at the first of two peaks.  Look how kitted out they are - it took me approximately 1.5 hours to get to this point, wearing jeans and a t-shirt with a rucksack containing a bottle of drink and some rice balls.  Some of these people look ready for Everest. 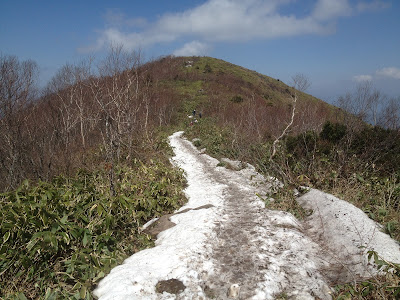 Iizuna has a kind of saddle between two peaks of the same height.  Here is some leftover snow on the path between the two.  I saw several muddy backsides on the way up as I passed people on the way down - this was why. 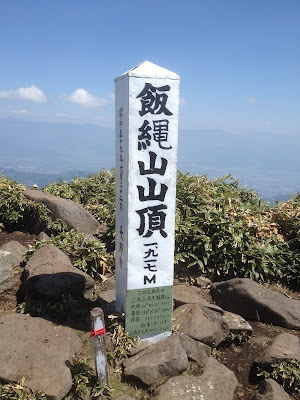 The peak marker.  The first three kanji are "Ii-zuna-san", the mountain's name. After that it says "San cho", or "mountain peak".  Following that is the height written in Japanese numbers - 1917m.  The altimeter I downloaded halfway up (gotta love iPhones) claimed it was 1922m, so unless I'm three metres tall one of them is a little off. 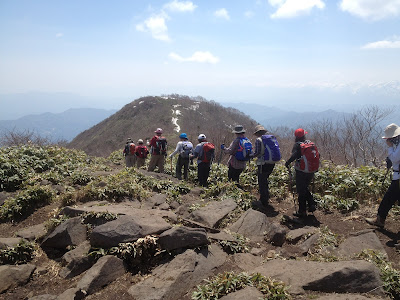 A hiking group heading back towards the first of the two peaks.  Again, note how well-equipped they are. 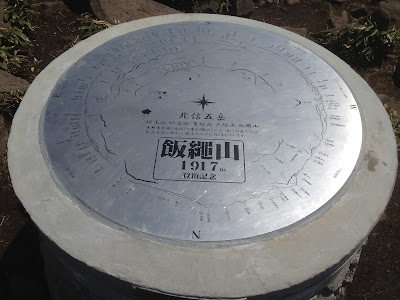 A marker at the top indicating which mountains can be seen in which directions.  Most mountains have these, and as always this one claims you can see Fuji on a clear day, some 300km to the south. 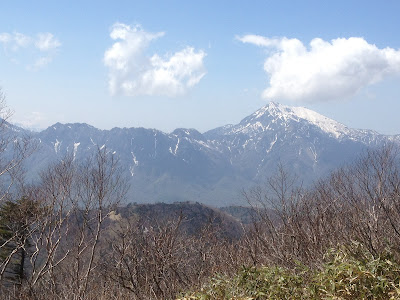 Takazuma, 2300-odd metres, still with snow on the top, seen from the top of Iizuna.  It is part of the Togakushi range, a small range of mountains between Iizuna and the Alps.  While not so high, Mount Togakushi, just out of shot to the right, is arguably the hardest day hike in all Japan.  Very dangerous, it has claimed many lives, particularly due to the section known as the "ant-walk" (the middle picture at the bottom).  Having done it twice, trust me when I say its scary. 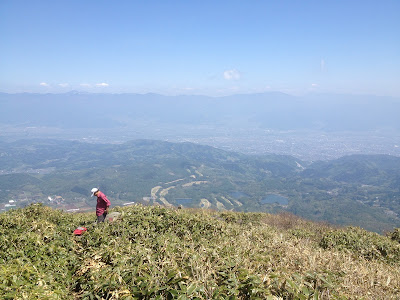 A nice view from the top across towards Shiga Kogen, one of Japan's premier skiing areas.  Even now, in May, some of the resorts there are still partially open. 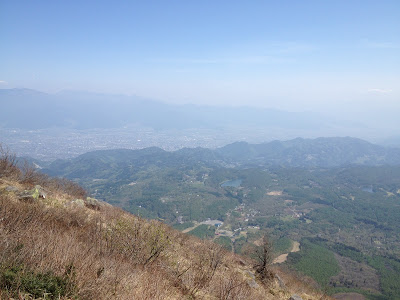 The lake in the middle is Iizuna lake.  My house is just over the hill a little past it. 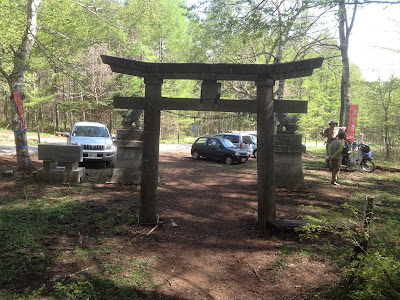 Back at the start, with my car seen through the shrine gate at the entrance, like some kind of metallic god of junk.  It took me roughly an hour to get back down.  All completed within three hours, my legs still felt pretty sore the following day.  While an elevation change of 712m is not much compared to some mountains (The shortest way up Fuji, for example, requires an elevation change of 1350m), it was still a decent morning out. 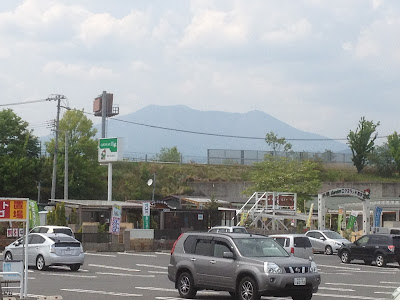 Here's a view of the Iizuna taken from Nagano City the day after my hike.  The two peaks I climbed are the two separated by the saddle to the left.