My first British review for Tube Riders came in and I'm pretty pleased with it.  I've submitted the book to a lot of bloggers but The Future Fire is also a well-respected small press magazine.  After I subbed it there for review back in June I read through a few of their previous reviews.  It became quite apparently that they wouldn't take any crap and would call a spade a spade.  I hear a lot of reviewers giving it the "well, I feel bad if I have to give less than four stars" line and while I understand the desire to be nice on the other hand this keeps a lot of junk afloat when some writers really need to be told, "Sorry, you suck.  Go away for five years and practice and then come back."  As a result, a lot of good books get drowned out by the noise given off by all the crap.

So I was a little nervous.  Would I get a good one, or would I get canned?

Here's what they said -

The Tube Riders, written by Chris Ward and available through Amazon Digital Services, is a gritty dystopian novel set in future Britain, known as Mega Britain. Now a corrupt, deliberately isolated and socially devastated island, the government rules oppressively and the poor scavenge for food under a persistent threat of suspicion by the Department of Civil Affairs—almost like an Orwellian Thought Police outfit.The novel’s focus is a gang known as The Tube Riders. Walled within a devastated London—now called ‘London Greater Urban Area’—the group have developed a high-risk game that involves leaping onto the side of moving trains from underground platforms and hanging on for as long as they can. The head of this gang is Marta, who took over leadership from her missing brother. She is supported by the experienced and friendly Paul, the dangerous yet highly loyal Switch and Simon, who is soon joined by his girlfriend Jess. Part way into the book, Paul’s 12 year-old brother, Owen completes the group. Despite most of the gang being relatively friendly—misfits who desperately try and keep their heads down in the civil dystopia that otherwise envelopes them—The Tube Riders appear to have a notorious reputation which is rarely challenged.This changes dramatically however when they are betrayed by Dan, who leaves the gang in the first chapter after an argument with Switch. Dan approaches rival gang The Cross Jumpers (who jump across tracks in front of oncoming trains)—and tells them of the underground station where The Tube Riders are located in order to curry favour. The Cross Jumpers, led by the deranged Deggo, move to attack but The Tube Riders manage to escape by jumping onto the side of a train and heading down a tunnel. They jump off in unfamiliar territory, only to witness a brutal crime at the hands of government agents. The Tube Riders, as witnesses, subsequently become wanted individuals. Their survival is threatened further by the Huntsmen, biologically-altered, government-bred killing machines who track their prey like dogs. The story delves into The Tube Riders escape and beyond as they carry devastating evidence, film footage captured on camera, and ultimately seek to expose the corrupt authorities.The novel, as with any traditional dystopia, is a satirically critical perspective that relates to contemporary society. Mega Britain is a grotesque corporate monstrosity that seems like the result of staunch right-wing capitalism and authorities drunk on maintaining a pedantic level order and control, regardless of costs. The class system is polarised more than ever, the poverty is both stark and foreboding and the iron fisted authority often seems to have it’s roots in contemporary right-wing governmentality. In many ways it’s an even bleaker society than that of Moore’s V for Vendetta, and just as striking in written word than animation.I enjoy analysing these kind of novels from a feminist perspective and The Tube Riders is an interesting study. The gang leaders Marta and Deggo—both powerful characters in very different ways—make the story interesting in that the ‘good’ and ‘bad’ sides are represented by strong female characters. The sinister government authorities, led by the Governor (think of a very hands-on Prime Minister!) are resoundingly ‘male’ and yet seemingly peripheral to the main character development. It is, by no means, a feminist novel and yet I saw little that differentiated women in a discriminatory way. Society has a distinct phallocentric hegemony and so any perceived sexism is more a factor of the dystopic society, rather than any casual subconscious implication by the author. In many respects the fact that characters are or are not female becomes mostly invisible; you have those which are strong, sensitive, violent, caring and determined—gender is not a label that is associated by default with any. If a reader considers the caring mentality of Paul, the fierce loyalty of Switch and the strength of Marta, such qualities are actually interchangeable regardless of biological sex.While many dystopian novels export a moral of some kind, a classic message or a political pamphlet of some kind, I felt that The Tube Riders was just a very good adventure story. The pace is as relentless as the trains themselves and the narrative physically throws characters around like puppets. The story is very much a work of popular fiction, a text that takes the reader to the dark and scarily recognisable Mega Britain and yet lets it’s characters shine through brightly in spite of it. It’s perhaps then a tale of raw human determination overcoming adversity more than anything grander.In conclusion, The Tube Riders is a tense, gritty and enthralling thrill of a dystopian novel, the break-neck speed of which is the kind that refuses to warn you of upcoming bumps and denies you the breath to secure your seat belt. You often feel jolted, shocked and yet sometimes deeply touched by the very humanistic adventure it describes. If you enjoy solid British sci-fi, or like me, are a sucker for terribly bleak yet well written dystopia, the book is a joy to read and something that really does stay with you long after you turn the final page." 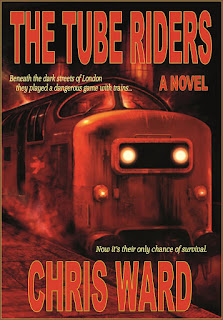 I'll take that.  In fact, I'll quite happily take that every time.  It's certainly given me a lot to think about, especially as the sequel is now being written.

Just a shame hardly anyone else as read it, but I can live in hope that with a few more reviews like that people might start to pay attention.