I loved the train, but unfortunately the readers didn't (or at least no one bought it with the train on the front) so it had to go.

However, I will keep it up as the banner on my Facebook page for now, partly because its a great picture by a really talented artist and because I like it.

I've been thinking to change the cover of Tube Riders for a while, mainly because I didn't feel that it really reflected the contents of the book.  While the original train picture, titled Final Train (just look at it, is that not a fantastic picture?  Incidentally, this is the one I was hoping to get for part two), was supposed to suggest a train that takes you to hell or something like that, when I had to crop it for the ebook cover it lost a lot of its fearsomeness and became, well, just a train.

Initially I considered doing a new cover myself, but I have big plans for Tube Riders and the reviews I've got so far suggest those plans might be justified, and felt that it was time to step up and get a pro to do it.  A writer friend of mine, Jenny Twist (thanks Jenny!), suggested Su at Novel Prevue.

Not only did Su really understand what I wanted but she was quick, cheap and easy to work with.  I still can't believe she can be doing this for anything less than love at those prices, and I'd strongly urge any writer on a budget to check her out.  Her prices might be budget but her work isn't. 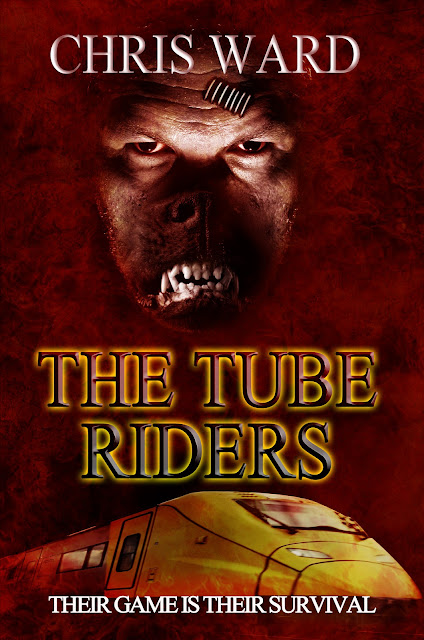 This one really ramps up the scariness.  That evil guy in the middle is a Huntsman, one of the government's near uncontrollable, tracking/killing machines, a group of which are sent after the Tube Riders.  And there's a train on the front as well.  Su did me a slightly different version with wires coming out of the guy's head, but I think I like the chip best.  Kidnapped off the streets of London, the Huntsmen are people who have been genetically and physically altered to become part dog, part machine.  It looks a little more like a horror, but while its set in the near future there are some pretty bleak scenes, particularly those involving the Huntsmen.  My mother found it a tough read, let's put it that way.

And here's the paperback - 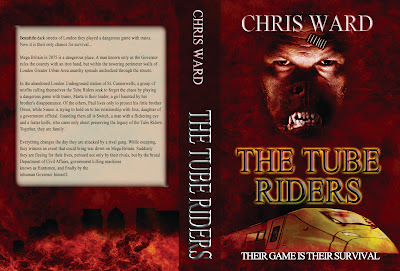 While I actually liked the original Createspace cover more than the original ebook one, this new version just takes it to a different level.   It's currently in review, so hopefully will be available in a couple of days.

Right, now back to writing Part 2.  I'm not one of those writers who tends to hide their progress, and I'm happy to say that I'm closing on 150 pages now, a little over a month after starting.  You won't believe what Switch is about to blow up this time ...