As part of an attempt to research for Part 2 of Tube Riders (tentatively titled Tube Riders : Exile) and also to add a little more later detail to Part 1, I took myself off down to Karuizawa on the edge of Nagano Prefecture last weekend to check out the old train line from Karuizawa over the border into Gunma via the Usui Pass.

Until 1997, it was possible to get from Nagano to Tokyo via the Shinano railway, the old trundler which I can imagine took about a year, judging by the fact it takes 1 1/2 hours just to get to Karuizawa. However, since the Shinkansen line was put in around the time of the 1998 Nagano Winter Olympics, a section of the old line was discontinued, meaning its Shink, walk, or give up.  On looking at it, that there is only 11km of the several hundred km missing, it does appear to be a blatant attempt to push business towards the Shinkansen.

The old line roughly follows the old Nakasendo, or post road, that wound its way up through the mountains.  It was very steep, therefore utilizing an old rack and pinion method to get over the Usui Pass.  There are also a lot of tunnels, as well as the pretty famous Megane Bashi, or "Glasses Bridge", the tallest arch bridge in Japan. 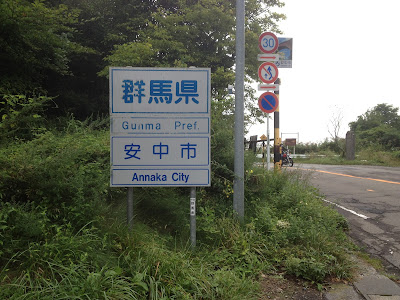 I rented a grandma bike (Mama-chari) without any gears for 200 yen.  I had no idea there would be a 10km uphill mountain pass to climb on the way back. 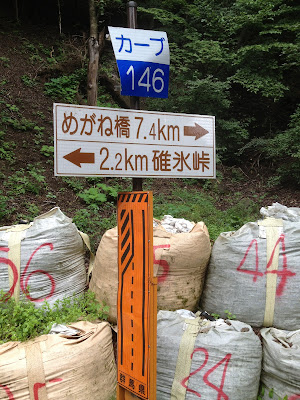 7.4km more to Glasses Bridge.  It was all downhill. 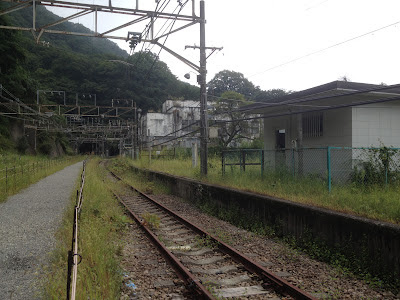 The old station at the start of the trail.  This is about halfway between Karuizawa and Yokokawa.  I had wanted to walk the whole route but it had disappeared, so this was the official starting point. 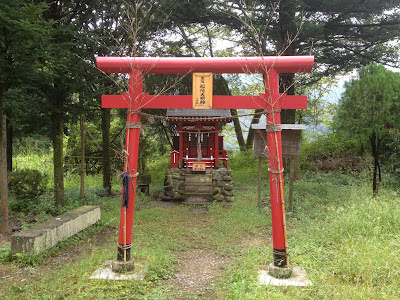 A little shrine at the entrance. 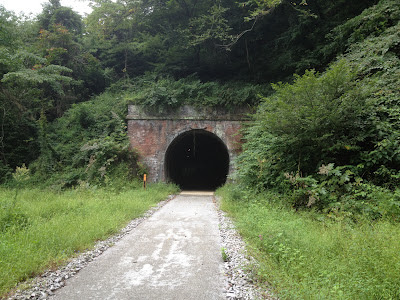 The first of about ten tunnels, all of them heading downhill.  Walking through the dark got tiring pretty quickly. 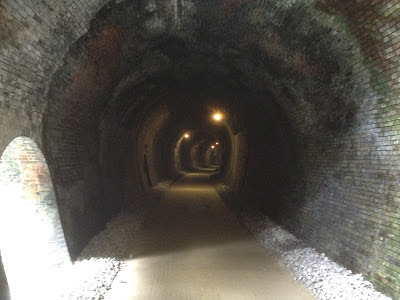 Inside one of the longest tunnels at 544m.  Note the little "air holes" on the left side.  I was planning to jump out of one in the event of an earthquake! 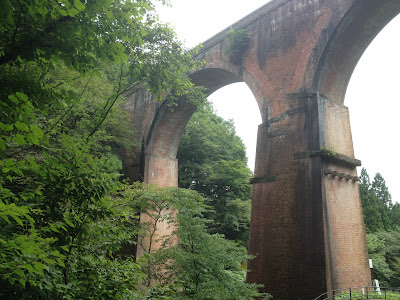 Megane Bridge from below.  It was actually far less impressive than I had expected. 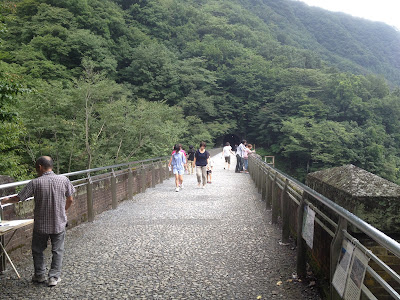 As usual with any photogenic spot in Japan, there was an abundance of old people in attendance. 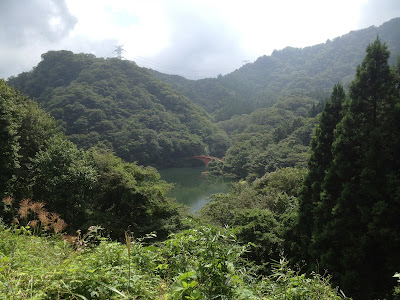 The view from the train line of Usui Lake.  While the walk was far less interesting than I had expected, there was some great scenery on offer. 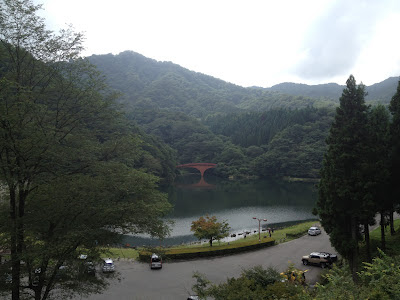 Another view of the lake. 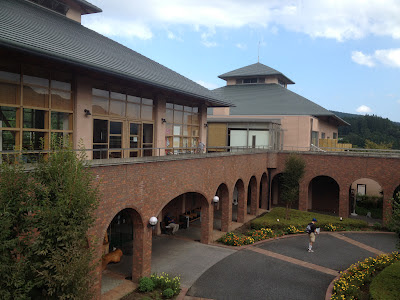 The onsen a couple of miles short of Yokokawa, where I gave up walking downhill, had a bath and got accosted into eating a pretty dire buffet lunch with two jovial old men called Toshiaki and Ken.  One of them ate like seven plates of food, at least double my effort.  I couldn't believe it.  He took bloody ages about it, too. 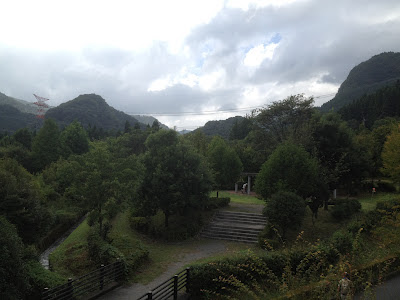 A view of some of the Gunma hills from the onsen. 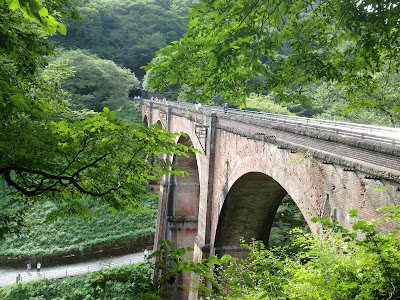 The bridge on the other side on the way back. 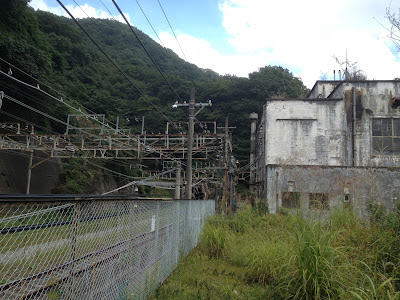 Back at the dirty old station. 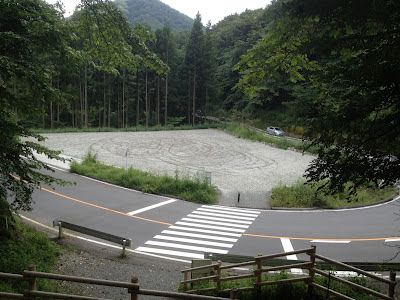 Against the far wall of the empty car park you might be able to see my bike.  I was pleased to find it was still there, although we had 10km of uphill to go yet. 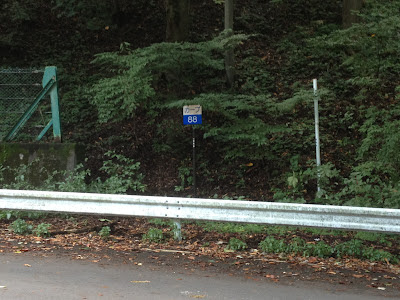 Curve 88 from the bottom.  I started cycling at curve 84, but I wasn't about to go back down and take a photo of it. 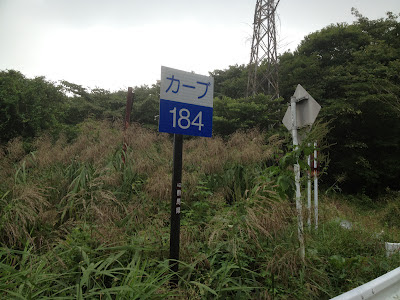 An hour of uphill and 100 curves later, I reached the top of the pass. 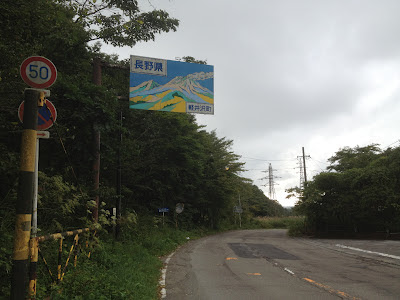 The entrance to Karuizawa.  I was close to death at this point, and four days later my thighs are still burning. 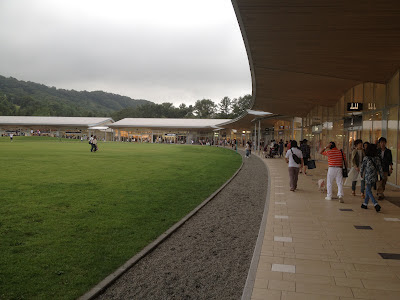 I guess while it was an interesting trip, I would probably drive next time, as I missed out on going to Yokokawa railway park basically because it was another four miles downhill and I was already exhausted.  I had gone to Karuizawa by train to keep in with the theme, but the railway line proved to be far less interesting than I had hoped.  There was no track left, and probably 50% of the time I was inside a tunnel.  Also, no English explanations didn't help.  Still, there were some nice views.